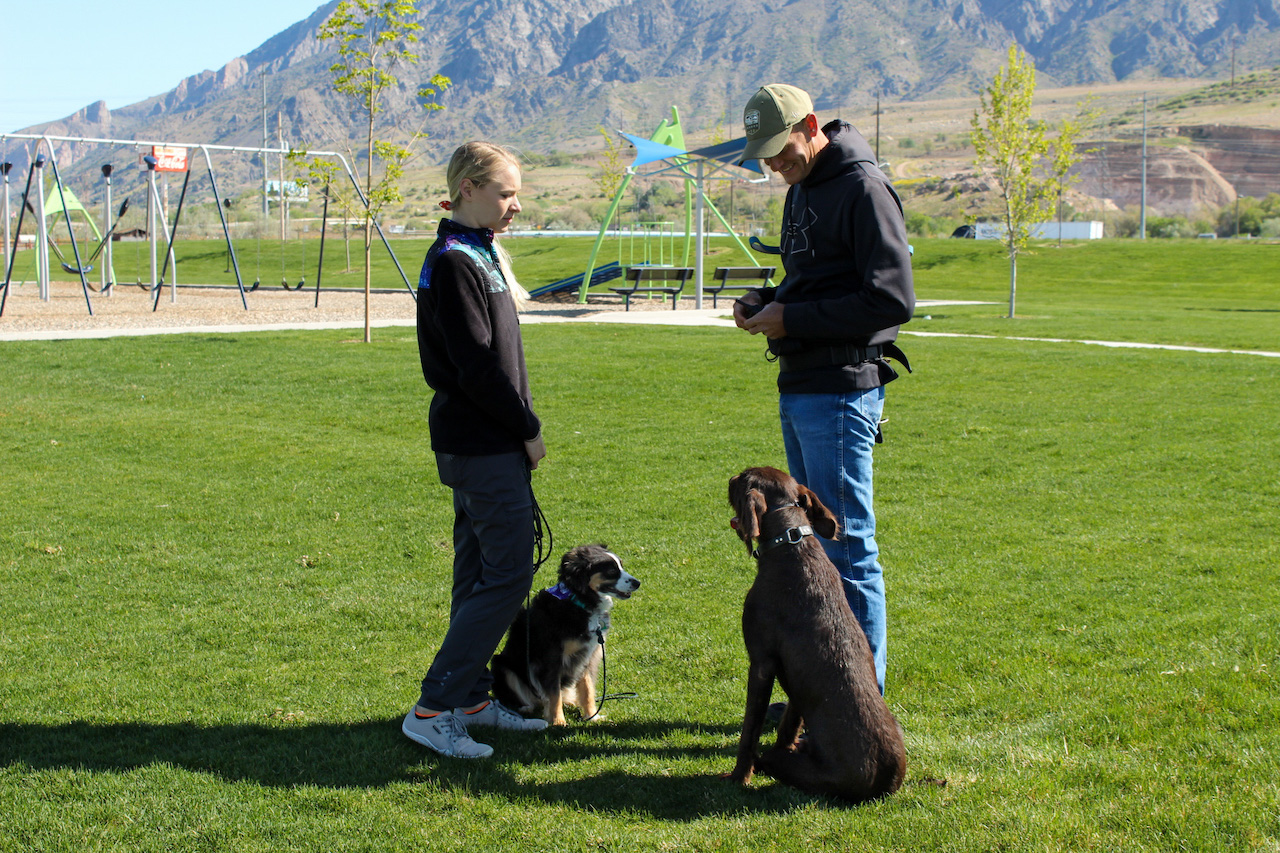 In our last newsletter I mentioned a singing audition for a popular TV show that I had recently watched. As usual my attention was captured by the communication and leadership that was going on between the judges, and contestant. After the singer finished the song, the judges made some comments on different aspects of her performance; the dialogue that happened there was fascinating to me. The exchange was filled with a lot of the leadership principles that we teach and use with our dogs here at T’s Doghouse: leadership, guidance, positive markers, negative markers, and rewards (praise).

The first thing to recognize is the dynamics of the relationship between the singer and the judges. In this particular situation the judges were in a position of leadership, they were going to decide whether the singer would get to continue on to the next round of the competition or not. Their leadership and guidance would help take her from where she was to where she wanted to be. In their time to critique, they had the opportunity to give some suggestions to the singer. Due to all of these factors, the contestant was all ears.

The first judge to speak began with a very positive statement. He said, “You have magic country stuff going on with your voice.” I saw this as a positive marker as well as a reward (praise). I believe that it established a positive mindset for the singer, or as we like to say here at T’s Doghouse, a gain mindset. The comment let the singer know that the judge liked her and was there to help.

The next statements that this judge made were quite obviously negative markers. These comments were not hurtful, but they clearly identified the problems that he was going to address. The comments were, “You are letting everything else get in your way,” referring to her nerves preventing her from showing her talent fully, and “I would give anything in this world to get you to sing on time a little better.” Timing and nerves were the two things that the judges marked as the problem.

With the problems clearly marked and the fact was well established that the judges were there to help, the real magic began to happen. All three judges stood up and joined the contestant on stage. The judges then started walking around and easing the mood, which helped the performer to relax. I was able to visually see the singers nerves begin to settle as the energy associated with the experience began to noticeably change.

The music started again and the judges started snapping, clapping, and moving with the rhythm of the music. One could be heard saying “Stomp it out. Timing.” As the singer relaxed and got on time with the music the positive markers really began to show up in the form of both verbal communication through statements like “There it is,” “Yeah,” and “Mmmhm.” I also saw visual communication in the forms of smiles, head nods, and winks.

These markers were then followed by the rewards. Saying things like “The way you say crush is magic,” “That’s good,” “You’ve got talent in spades,” and even some cheering were all ways the judges rewarded the singer.  These statements left no question that the judges were pleased with her improvements and that they had faith in her. Then came the greatest reward, a ticket to the next round of the competition. By using these leadership principles the judges were able to help the singer perform better than they did on their own.

When we are working with our dogs it is important that we help them to understand that we are there to help, the same way the judges did for that contestant. Positive marking the things they do well and the things we are pleased with will help them to recognize what it is that we like. In turn, those actions are what helps them get the reward that they are looking for. It is also critical that we learn how to identify problems within our dog’s behavior and make sure that we clearly point these problems out through effective negative marking. The same way that the first judge marked the issues without being hyper aggressive or overly hurtful should stand as a good pattern for the negative markers we should be implementing while training our dogs. After marking these problems, it is critically important that we give positive markers and rewards when we see the improvements in behavior that we are looking for. This will help solidify that behavior in the dog’s mind and help it to continue to make those choices more regularly in the future. As we learn to show our dogs that we care about them and are there to help, we will be able to better communicate the behaviors with which we are pleased or displeased. We will then have the opportunity to guide our dogs towards the types of behaviors that are going to be best for both them and us.

One of the things that fascinates me about dog training is how true the principles are in all aspects of life. These leadership principles show up in parenting, business partnerships, romantic relationships, friendships and just about any type of interaction we come across in everyday life. The commonality of these principles in different areas of life are one of the things that helps me to know that they are true principles. The teachings of these true principles is what we are all about here at T’s Doghouse. They apply to leadership within our personal relationships as well as our relationships with our dogs. At T’s Doghouse we teach dogs to look to people, and then we teach the people how to lead.

Click here to check out the clip and see if you can find all of the leadership principles we discussed!

If you want to learn more about how we teach these principles in dog training check out our video library here!

​Payment due on or before first day of class.

Thank you! We look forward to working with you and your dog!